Career support at DHU is facilitated by a full-time, dedicated staff

From the first year students enter DHU, they are involved in our career education program, and we also conduct seminars for understanding different industries and job types, strategies for interviews, and provide information on internships

Preparation at an early stage is crucial for finding a desired job. DHU offers career education from the first year to help students have many opportunities to make contact with corporations and engage in self-discovery. It also helps develop communication skills and the ability to succeed in society, making it easy to smoothly begin job search activities from the third year.

2. Both staff and faculty work together to provide students with strong support to realize their career goals

The reason behind DHU’s strength in supporting students’ job search activities is that enthusiastic faculty and specialized staff work together to support each student in finding jobs. Vastly experienced faculty with networks in each industry team up with staff specializing in job searches to offer career counseling and prepare them for interviews, offering careful support to realize their career goals.

From students who aspire to a specialist job as a designer, to those who prefer a management, DHU offers a full line of employment support seminars that suit their needs. In addition, each student will receive thoroughgoing guidance individually on how to write an application and prepare for interviews.

DHU offers an array of information from the basics on employment to lectures by inviting people who are active in each industry, giving opportunities for students to learn about employment and industries. For students aspiring to work in creative jobs, DHU offers a full line of unique opportunities, including seminars for preparing portfolios and sessions for receiving advice on production from recruitment officers.

Students can seek expert counsel from a certified career counsellor according to their individual career desires and concerns. The counsellors make corrections to resumes, help students prepare for interviews, and provide guidance on portfolios according to individual goals. The career center is staffed with job search facilitators from the Public Employment Security Office (Hello Work) on a regular basis.

DHU offers internship programs with a number of corporations. Some programs invite students from their first year. By working at corporations, it allows students to experience actual workflows, corporate activities, and involvement in society.

1. Students can gain work experience in a range of front-line industries!

DHU boasts a network of various industries from TV, movie, game, and animation to the Web where students can participate in internship programs in many different companies. Each year, numerous students gain valuable experience by being exposed to actual workplaces. By experiencing actual job sites and the forefront of creativity at corporations, students have an opportunity to visualize their future.

2. Approx. 80% of students who received official job offers at an early date have gone through an internship!

Many DHU graduates say that internship programs changed their perspective. Students can also understand actual job tasks and how companies actually operate along with learning how to communicate on job sites. These experiences are very advantageous in job search activities. Approx. 80% of DHU students who received official job offers at an early date have experienced an internship.

3. Their experiences are recognized as credits by compiling a report for submission.

To avoid overlapping with school, internship programs are offered during a long-term break. Most students participate during summer vacation in their second and third years for three to four weeks (five days a week.) Some of the work can be recognized as university credits by compiling internship outcomes into a report for submission.

Some examples of Internship partners + fields

My job is to deliver Japanese pop culture to the world at CYBIRD. 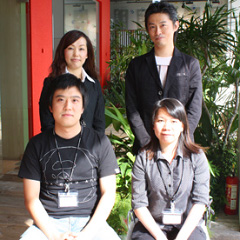 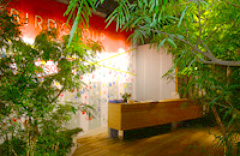 CYBIRD Co., Ltd., is a pioneer in mobile content services specializing in website development, application development, e-commerce services, and other mobile businesses. Recently, the company started projects to deliver pop culture to the world through social media. International students who are fascinated by pop culture, as disseminated by the company, joined CYBIRD as part-time workers to share the information. We visited the offices of CYBIRD for interviews.

Meri and Lu Guo came across a job posting for part-time work at the DHU’s Career Center in late July. They used to work part-time almost every day on weekdays during summer vacation from the end of August to the middle of September. The company recognized their hard work and asked them to continue working after October. They now work twice a week in the office near Daikanyama Station that has the quiet and sophisticated atmosphere.

Meri, an international student from Indonesia says that she enjoys herself working part-time every day. She takes advantage of her language skills to translate articles about well-known celebrities from Japanese to English. Meri transferred to DHU as a third-year student to study film production. While studying film production techniques in class, at work she gets to be in charge of film production as a part-time worker. She delightfully said, “I went to a shooting location of Kamikaze Girls (Shimotsuma Monogatari) in Ibaraki for coverage the other day.” Many people see Meri’s posts on Facebook and leave comments on the videos taken and edited by Meri. She has received likes from 40,000 people on Facebook within three months since its launch. Her posts have become a popular topic of conversation as the number of “People talking about this” reached over 16,000 people on Facebook.

She happily talked about her experience in going to cover a famous fashion brand. “My job is to edit videos that convey excitement!” 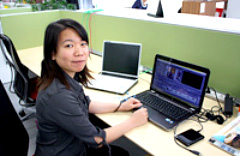 Lu Guo is from China and works at CYBIRD where he can use his native language. In fact, Facebook and Twitter are restricted and not accessible in China. He posts comments on Weibo, which is often called China’s Twitter, and Renren, a social media site similar to Facebook, in Chinese. The posts receive a positive response on Weibo. A manager of the Recreation Division, Yuki Urano, who provides guidance to part-time workers, said, “Lu told us that Weibo is popular in China today. He has been very helpful because he not only takes care of the jobs he has been assigned but he also shares firsthand knowledge of the trends in China. We consider it valuable information because there are things only he knows from the perspective of a young person, student, and international student.” 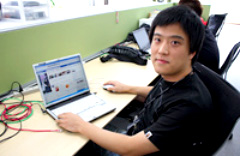 According to Takashi Miyazawa, a senior manager of the Management Planning Section, Corporate Division, said, “The students of Digital Hollywood University are equipped with skills and commitment. What’s more, international students are strong in the language skills of their native language. As they fully display their skills, it becomes possible for us to cross with existing business to develop a larger business opportunity. In the future, as there will be more chances to turn to overseas and expand business, I am sure there are jobs that they can only accomplish.” He gave us such an encouraging comment.

With Mr. Miyazawa and Ms. Urano who provided me guidance. The office was surrounded by lush greenery on a conference room floor.

The office was surrounded by lush greenery on a conference room floor. A frequently asked question by international students is, “Is it possible to obtain employment in Japan?” This time, after the interviews of students working part-time, we realized how confident they were and that the international students expect to enjoy a wider range of opportunities. We are looking forward to seeing students gain solid abilities and communication skills so that they can succeed in the world!

All contents of Career Support